Climbing the Stairs in the Housemaid: Memorial Exhibition upon the 20th Anniversary of the Death of Cineaste Kim Ki-young

Film director Kim Ki-young. The 1960s and 1970s were his heyday, after which he was largely forgotten. His filmmaking was acclaimed anew by youthful domestic and international audiences in 1997, but no sooner had he begun to attract attention once more than he passed away in a house fire on February 5, 1998. It was as if the star in a film had died. Now, the Korean Film Archive wishes to commemorate Kim Ki-young on this, the 20th anniversary of his death, by looking deep into the film world of one of Korean film history’s most distinctive filmmakers.

Kim Ki-young is most famous for the expressionistic, eccentric and grotesque philosophy in his films. But he was also a realist; he passed comment on the contemporary through his literary dialogue, and was inspired by actual events. He represented the era in his characters, staying faithful to their desires and instincts via his novel, effective mise en sc？nes. That most notable element, his stairways, are used to visualize class distinctions and conflicts, and symbolize the boundaries of the conscious and unconscious.

This exhibition offers many attractions to patrons, including opportunities to experience the stairways and mise en sc？nes of Kim’s films. There are also videos about Kim’s life and the props he created. This event is not about the legendary cult filmmaker Kim Ki-young. Rather, it is about the realist Kim Ki-young; the man who documented our Korean self-portraits in his own special way. It will show museum visitors the compassionate side of the man. 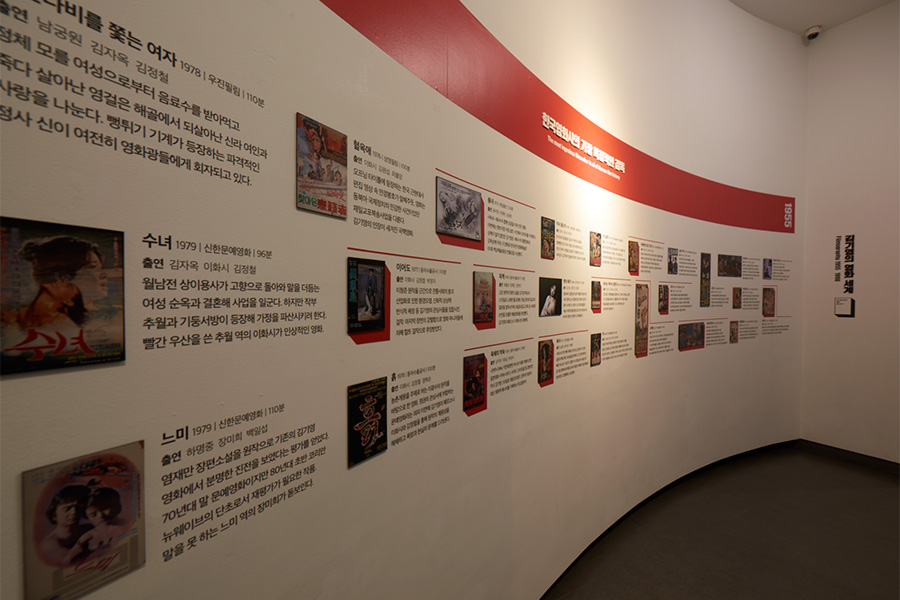 Director Kim Ki-young made 32 films over a period of 35 years, from the Box of Death in 1955 to An Experience to Die For, which opened at Busan International Film Festival in 1998 before going on general release the following year. Famous directors tended to do more than ten films a year in the 1960s; compared to that, Kim did not make many at all. Instead, he went for manual production in reality with a critical auteurism. He ran his own production company, writing all his own screenplays and directing all his own films.

Director Kim Ki-young was born in Gyo-dong, Seoul on October 1, 1919. He was the only son among three siblings. He went to Kyeongseong Dentistry School, then joined the first united club of theater at Seoul National University. When the Korean war broke out in 1950, he fled to Busan. There he met a senior from school, Oh Young-jin, and they produced Korean News together. Then he produced Liberty News for the US Information Service. He made his feature-length film debut in 1955 with the Box of Death. He started directing again in 1997 after a hiatus of several years, but died with his wife Kim Yu-bong in a house fire. That was February, 1998. 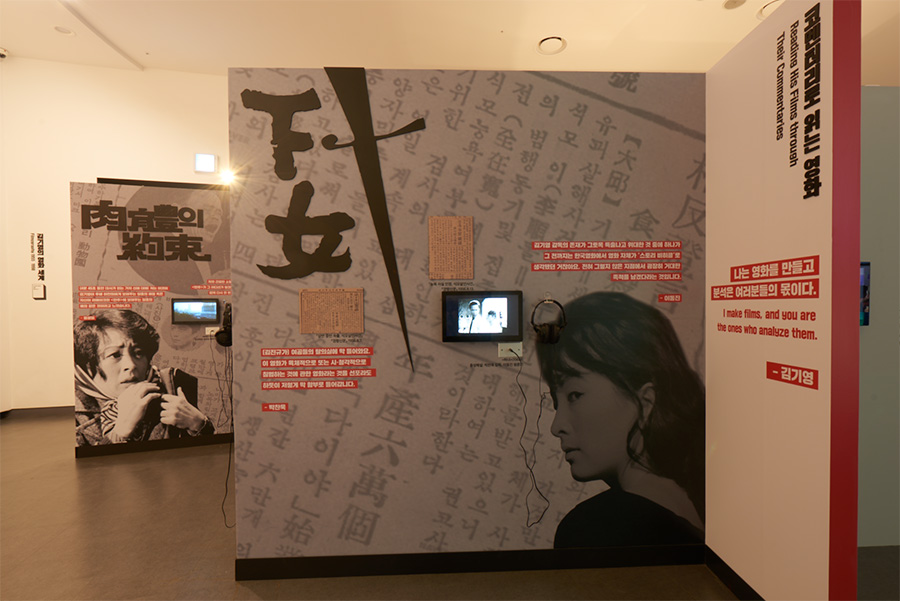 Reading His Films through Their Commentaries

Kim Ki-young has been acclaimed by contemporary directors and film critics alike. Director Park Chan-wook and critic Lee Dong-jin contributed commentaries to the Housemaid; critic Kim Young-jin and director Bong Joon-ho did the same for the Insect Woman; and critic Jung Sung-il did it for Promise of the Flesh. In the showroom, you will hear their views of the main scenes in Kim’s films. 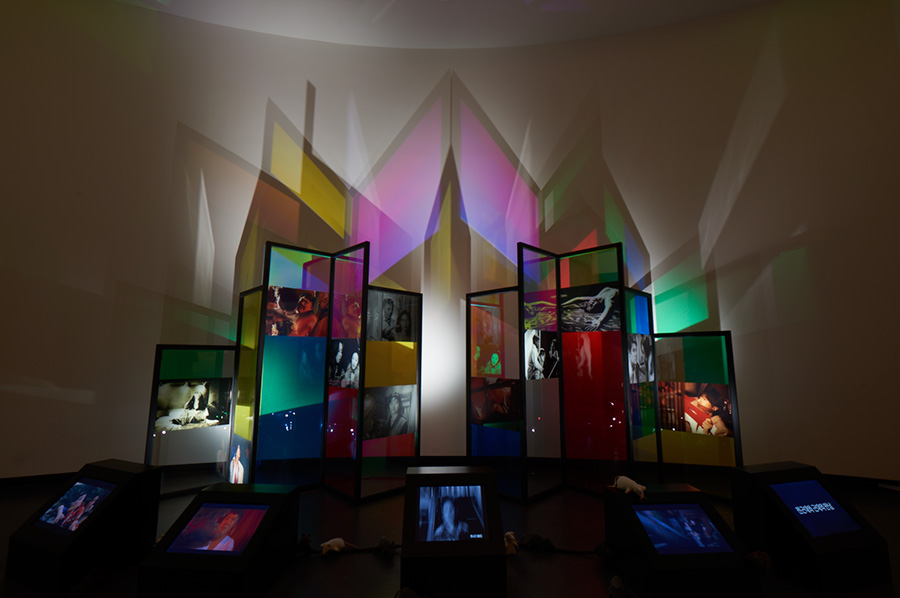 The showroom plays host to the stained-glass background in Woman of Fire and the Insect Woman. Five themed videos are screened here: Personas of Kim Ki-young; Women, Men and Eroticism; Variations of the Housemaid; Mouse in Kim Ki-young’s Films; and Rendezvous of Pre-modernity and Modernity. The stained glass symbolizes the fascination and disillusionment of modernity. Watching these five videos, you will enjoy the cinematic gem of Kim Ki-young’s films. 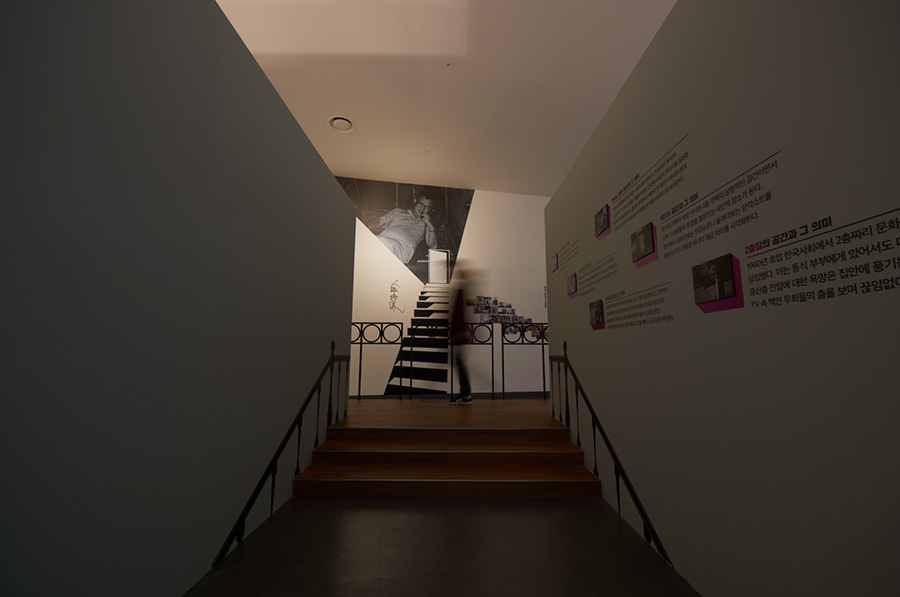 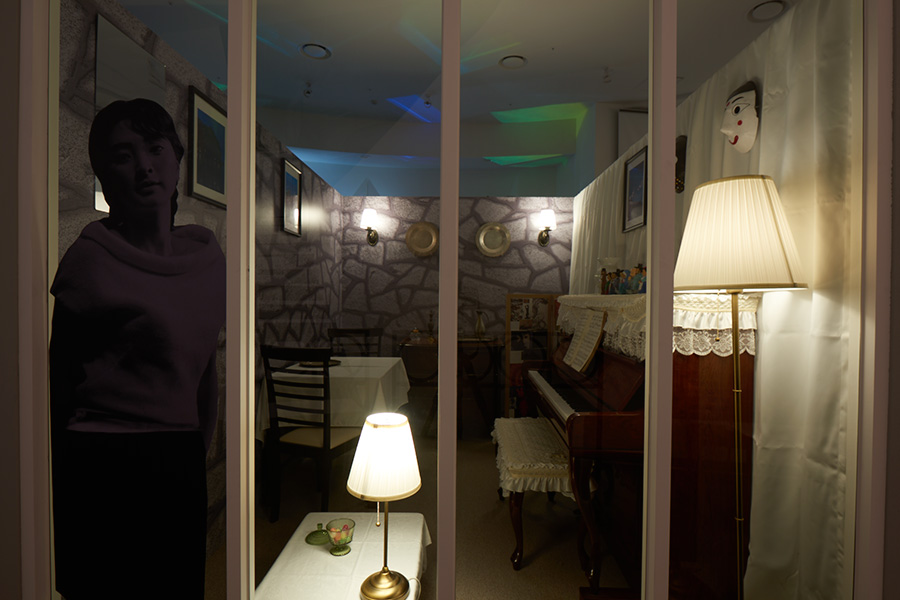 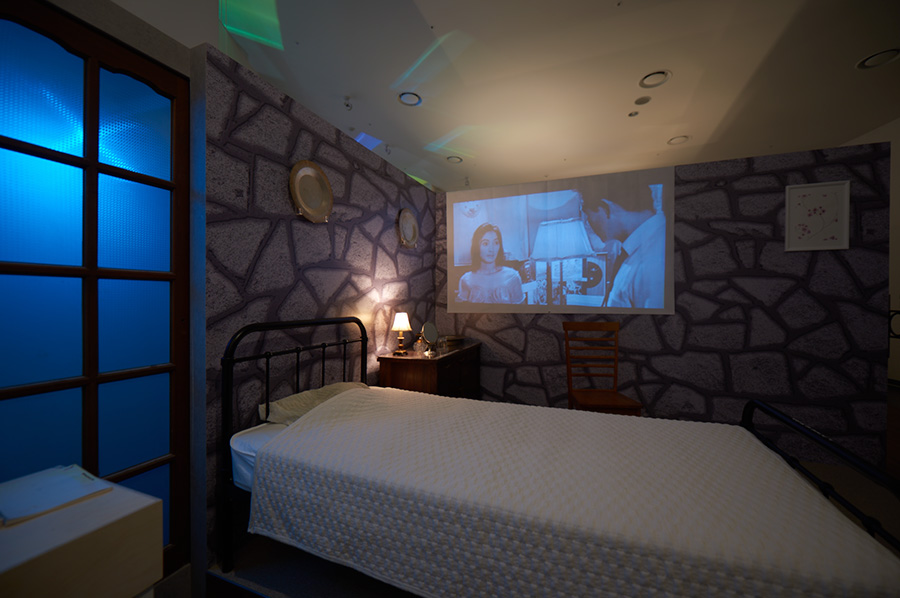 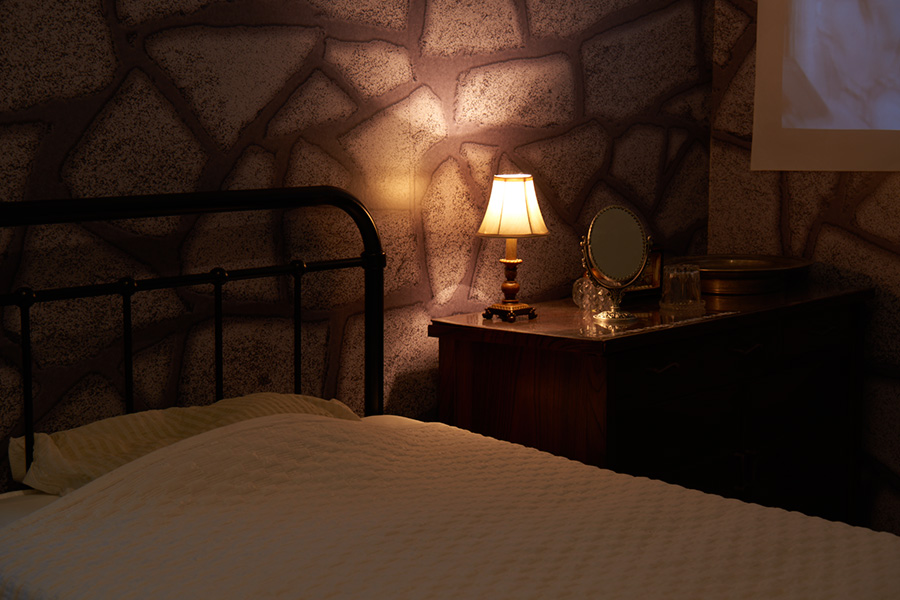 Second Floor in the Housemaid 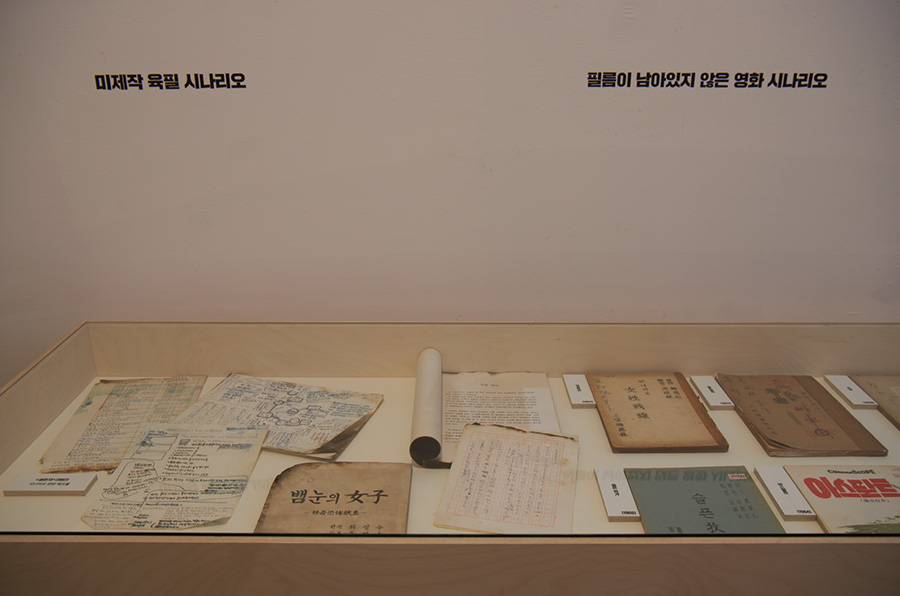 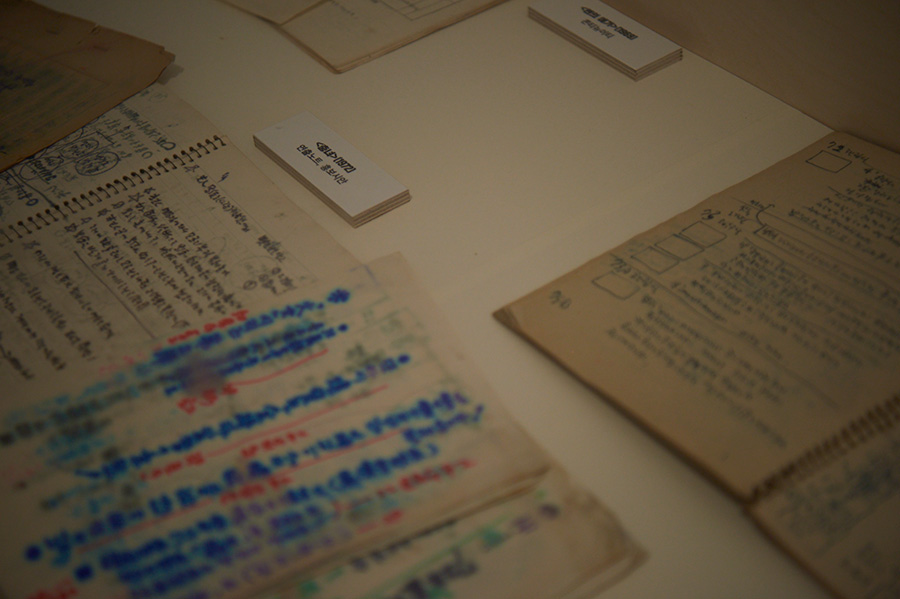 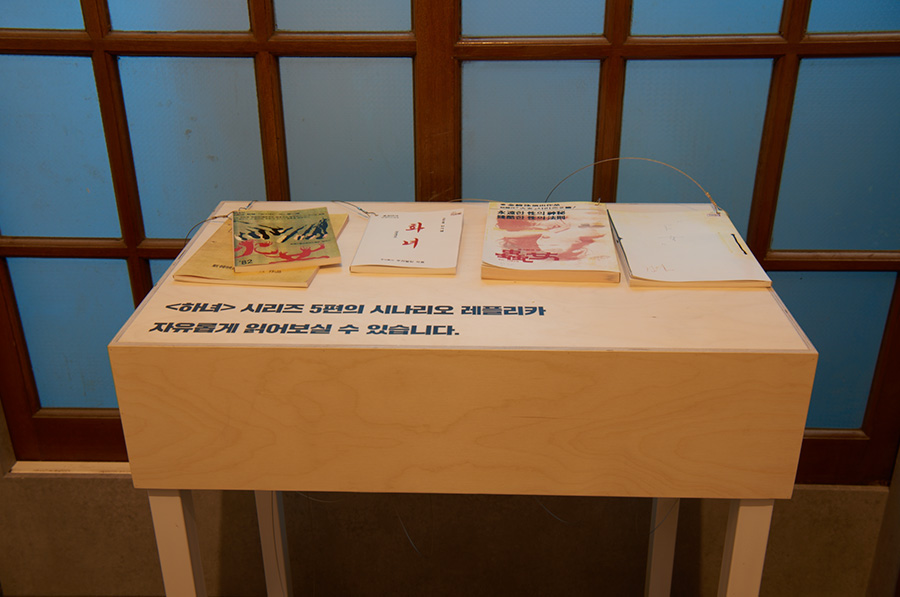 Here there is a precious opportunity to see manuscripts by Kim Ki-young that were found in his house after the fire that killed him, including some screenplays that had yet to be filmed. Also, there are replica screenplays of remakes and variations of the Housemaid, including Woman of Fire, Woman of Fire’ 82, Insect Woman and Carnivorous Animal. 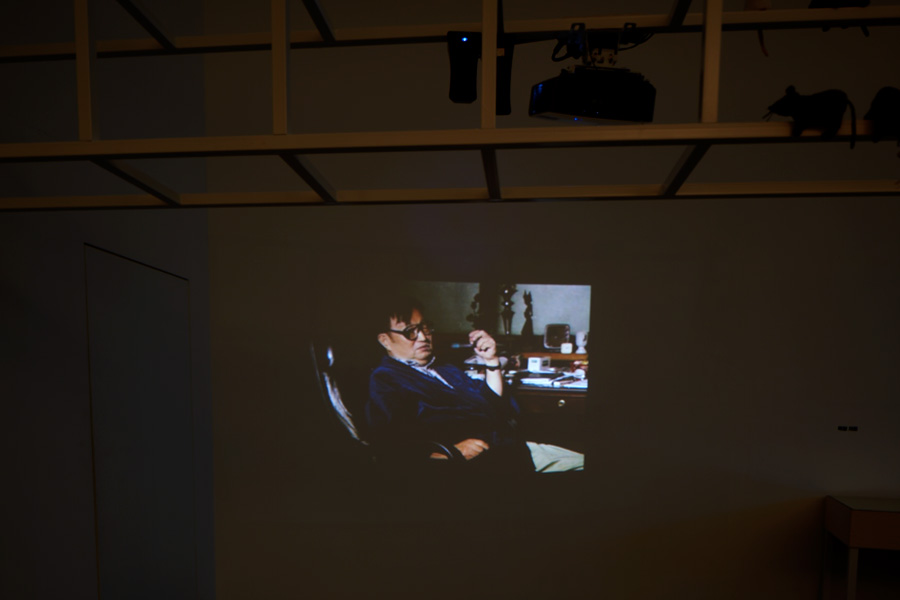 This film is re-edited from interviews with Kim done by Korean Film Archive in 1997. The plan was to make a documentary about him. This film offers a valuable opportunity to see Kim’s face, hear his voice and feel him while he was still alive. Here you meet a filmmaker who lived intensely and turned filming into a way of life.

This Memorial Exhibition commemorates the 20th Anniversary of the Death of Cineaste Kim Ki-young. Patrons have the chance to express their thoughts and feelings about director Kim Ki-young and his films here. You can also leave your impressions and opinions about the exhibition itself. In the Photo Zone, you can immortalize your memory of the exhibition by taking photos with Kim Ki-young in the background and in the room decorated with the props in Kim’s film, A Woman after a Killer Butterfly.